Have you ever though about building an iOS app? I did, but I now wish that I hadn’t.

Like many others, I read about Wordle at the end of December last year. Being a word game enthusiast, I found the idea of making the old game show Lingo into a single-player puzzle game brilliant. I enjoyed solving the daily word for a couple of days straight, but I found myself wanting to play more than once a day. Even more importantly, I wanted to play the game in my native language Swedish.

Having recently built a word game for iOS and Android, I figured I could make a Swedish Wordle-style game myself. I searched App Store and could not find any Wordle/Lingo-style games there, so on January 6 I added the first git commit of my game Wörd. I emerged into hackathon mode, and on January 7 I had a working version. Then followed some long days, evenings and nights of coding, making the game look and feel polished. Too similar for Apple

On January 11, I finally uploaded the first version to App Store, and on the same day Macrumors wrote an article about the many Wordle clones popping up in App Store. I had already guessed that I wasn’t the only one working on a Lingo-style mobile game, and searches revealed that there still didn’t seem to be any apps with a Swedish dictionary, so I wasn’t surprised or concerned.

However, what followed was an endless stream of App Store rejections. I tried to figure out what part of the app Apple found in breach with the App Store Guidelines while submitting new versions with different changes that I hoped would satisfy the Apple reviewer.

At first, I wasn’t that discouraged. I knew submitting apps to Apple was a dreaded task. Although I found it surprising that Apple chose to reject an app due to similarities with a website, my initial design did use similar colors as Wordle.

So I began making many changes to the app that I thought would satisfy the reviewer:

All of their rejections basically boiled down to:

During all these changes and submissions, I’ve tried to ask Apple what parts of Wörd it is that they find in breach of the Guidelines. Specifically, I’ve asked them many times if their official policy is to reject all apps implementing the Lingo-style gameplay due to the existence of the Wordle website. They’ve never given me an answer.

At one point, they put me in some kind of in-review-limbo where they themselves put the app “In review” for more than two weeks (without me submitting a new version). During this time when the app was “In review”, it was not possible to communicate with the reviewer.

As a last resort, I submitted an appeal to Apple’s review board, hoping that I had just run into a bad apple reviewer (pun intended). In the appeal, I tried to emphasize the fact that Wörd is in Swedish, uses a Swedish dictionary, and that you can play more than one game per day. Things that make it very different from Wordle. For a non-English-speaking person, Wordle is unplayable. Even for me, who speaks English reasonably well, playing the game in my native language is so much more enjoyable.

They rejected my appeal without giving me any more information:

During this whole process (more than a month), new Lingo-style apps have been popping up in App Store almost daily. Most of these apps are in English, and many resemble the Wordle website much more than Wörd does. When I’ve pointed this out to Apple, I’ve only gotten the answer that I’m free to “report” these apps if I believe they don’t follow the Guidelines. I don’t think these apps breach the Guidelines, but I guess Apple intentionally chooses to misinterpret me. 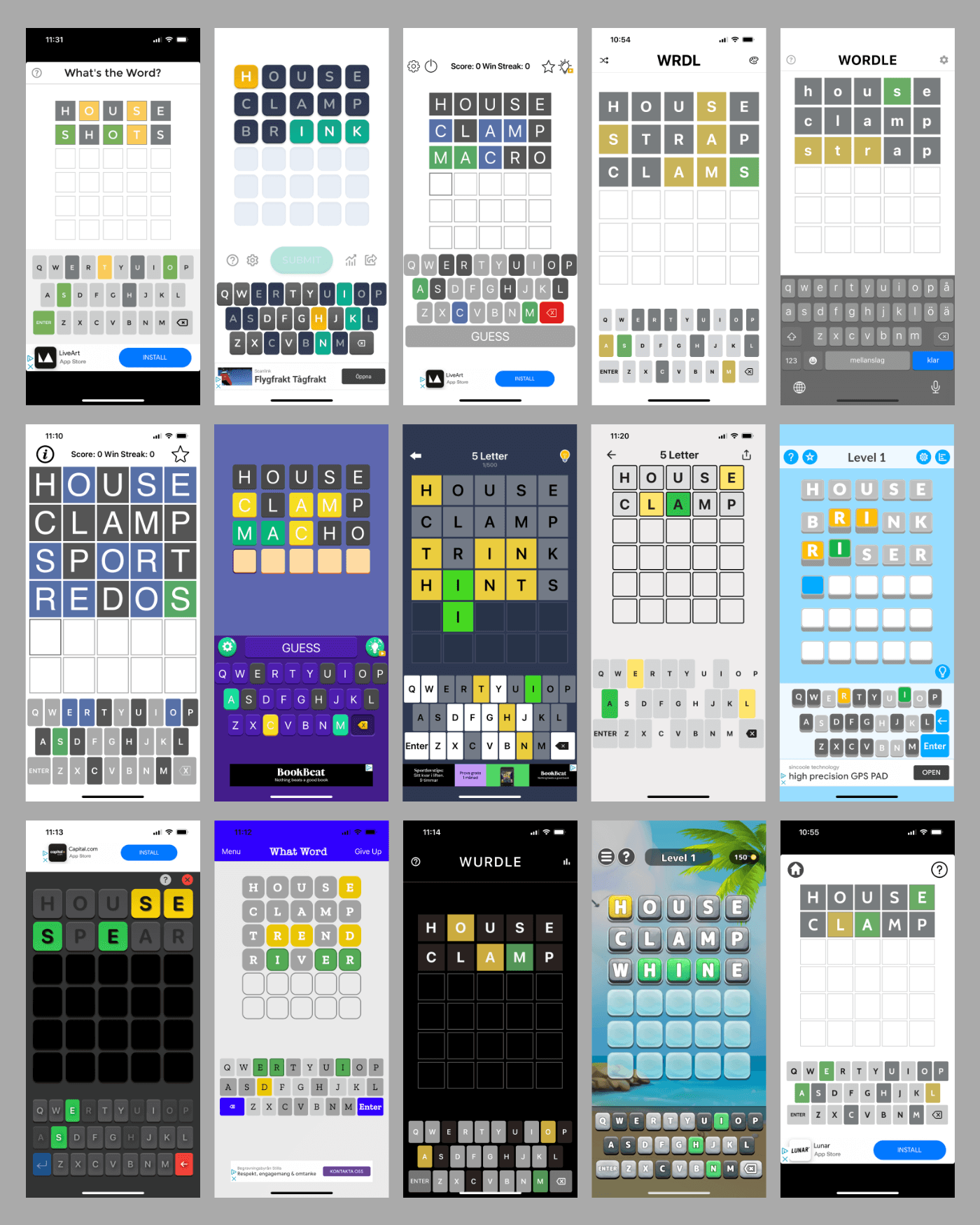 Most of these apps were published after I submitted Wörd. And these are just the first 15 I found when searching for “wordle” in App Store. There are many more. How can Apple - a trillion-dollar company - apply their intentionally fuzzy Guidelines so differently for different apps?

Using Apple’s logic, there shouldn’t exist any Minesweeper app on App Store, since they are all copycat apps of the original Windows game (and in case Apple don’t count Windows programs, web implementations exists). However, a quick search in App Store reveals:

Surely most people would agree that some of these apps “resemble” each other?

It’s possible to compile similar galleries for games like Scrabble, Boggle, Tetris, Breakout, Hangman, and the list goes on and on.

What’s even less surprising is how (little) Apple apply their Guidelines when it comes to their own apps: 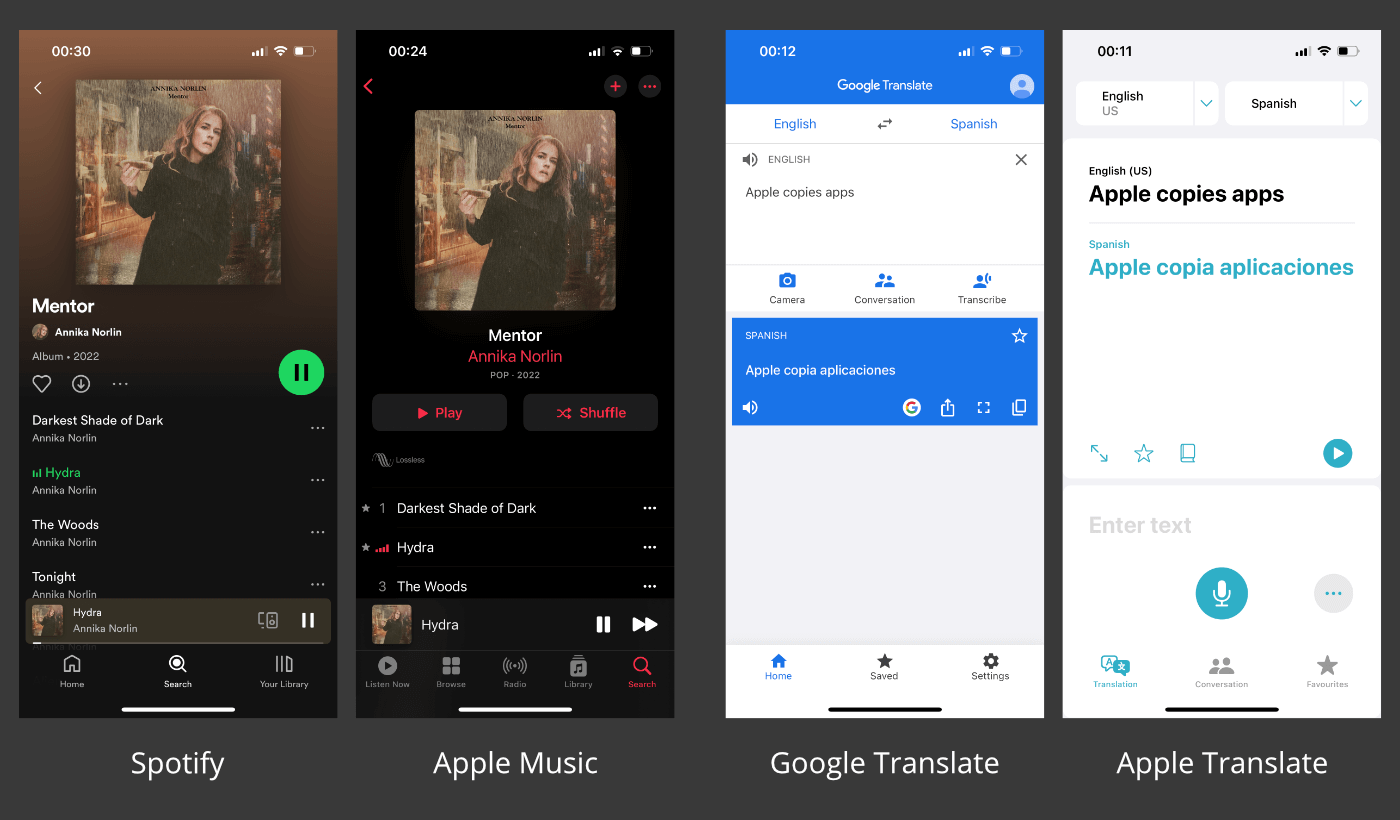 These are just two current examples. Apple has copied many more apps before. In a statement issued by Apple, they say that “The App Store has a uniform set of guidelines, equally applicable to all developers, that are meant to protect users”. Ha - that’s nothing but Orwellian newspeak.

I’m not arguing that Apple shouldn’t be allowed to copy apps and features - that’s how innovation happens. The fact that there are hundreds of different Minesweeper apps in the store makes it more likely that I can find one which accurately meets my preferences. What’s outrageous is that they use “resemblance” with another app (or actually, website) to reject my app while pretending that they apply their guidelines equally to all developers.

But it’s Apple’s store so they can do whatever they want with it!

They can, but they shouldn’t be allowed. Apple not allowing any competing stores gives them a de facto monopoly. A monopoly which they use every day to crush competitors, extort businesses and limit competition.

In the US, Apple currently has 60% of the mobile device market. Remember when Microsoft was fined $731,000,000 for shipping Internet Explorer as the default Windows web browser? What’s that compared to what Apple is pulling with their App Store monopoly? Heck, Apple doesn’t even allow any other browser renderers than Safari on iOS.

But even if you disagree with me, and you think that Apple should be allowed to be the only gatekeeper to 60% of people’s mobile devices. Surely you still agree that Apple should apply their rules consistently? In this case that would mean either allowing Wörd on the store, or purging all apps that resemble other apps from App Store. Starting with their own Apple Music and Translate apps.

As a developer, stay away from the App Store

It’s not fun having poured many days and nights of hard work into creating something, only to have it crushed by an erratic gatekeeper. But in the end, I get that this specific case mainly just concerns me. A casual word game less in App Store is entirely insignificant to the average user. However, if you’re a developer, my advice is to avoid the App Store. Avoid it like the plague.

Of course, for many developers this isn’t an option (that’s the thing with monopolies). You might be building a service like Hey.com, Trello, or Spotify, where not having an iPhone app simply isn’t a viable option if you want to stay in business.

However, if you do have the luxury to choose what projects to pursue, and what platforms to build for, stay away from Apple. I have this luxury, and I wish someone would have told me one and a half months ago.